AF Group announced its financial and volunteer support of the Habitat for Humanity Capital Region’s latest project at 1517 Muskegon Ave. in Lansing. 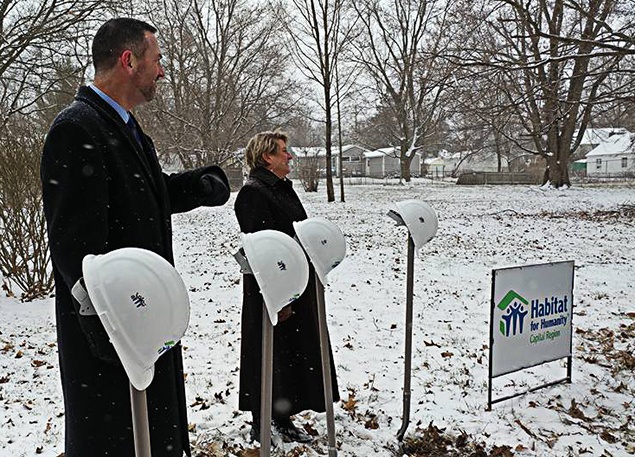 A groundbreaking ceremony including participants from AF Group, the Habitat board and Habitat staff took place on March 13. The new home will be built this spring and summer by volunteers from AF Group with the guidance and supervision of Habitat’s construction staff and skilled volunteer leaders known as the “Core Crew.” The home will be 1,300 square feet with four bedrooms, a bath and a half, and a detached one-car garage.  It is one of four new homes scheduled to be built by Habitat Capital Region in 2017.

Habitat homebuyers qualify based on need for adequate housing, the ability to make an affordable monthly non-profit mortgage payment to Habitat, and a willingness to partner.  In partnership with Habitat, the homebuyer for 1517 Muskegon Ave. will put in “sweat equity” hours, working side-by-side with AF Group volunteers.

“We are excited to work with Habitat here in Lansing,” said Mike Seling, vice president of Business Development and Regional Operations at Accident Fund Insurance Company of America. “We have dozens of volunteers signed up and ready to go.”

AF Group and its employees donated more than $20,000 to the local Habitat for Humanity Chapter as part of its Caring and Sharing Program.  Employees of AF Group and its four subsidiaries pledged $434,000 in support of nearly 30 charitable organizations in Lansing around the country as part of the company’s annual Caring and Sharing Community Campaign.  The total represents a record $217,000 in pledges from employees, and a corporate match of an equal amount.

“The Habitat for Humanity Capital Region and AF Group partnership has consistently grown over the years into a fully integrated collaboration that offers community investment, volunteerism and corporate team building while advancing Habitat’s mission to deliver strength, stability, self-reliance and shelter,” said Vicki Hamilton-Allen, executive director of Habitat for Humanity Capital Region.  “We are excited to build an entire house with AF Group volunteers.”