A new study in the Journal of Occupational and Environmental Medicine finds that concurrent treatment of chronic pain, depression, and/or anxiety and occupational injuries is associated with large increases in total workers’ compensation claim cost and delayed return to work.

The study, titled “Association of Opioid, Anti-depressant, and Benzodiazepines with Workers’ Compensation Cost: A Cohort Study,” was authored by Dr. Dan Hunt, medical director at AF Group, and Ryan Artuso, senior data scientist in Predictive Modeling for AF Group, in partnership with researchers from the Johns Hopkins University School of Medicine.

This study quantifies the magnitude of the medical resources used to treat patients injured in workplace accidents who have a concurrent diagnosis of pain, anxiety, and/or depression. Previous studies involving the workers’ compensation system have demonstrated a relationship between opioid medication prescription and escalating medical costs as well as increased claim duration. This analysis evaluated the impact of benzodiazepines and antidepressants in combination with opioids on workers’ compensation claim cost and closure rates.

A major finding of the study is the cost difference associated with antidepressant medications. “The overall direction of our findings was expected — injured workers who are experiencing a significant amount of pain or suffering from depression or anxiety will require more medical services than injured workers not experiencing such symptoms or psychosocial disorders,” said Dr. Hunt.  “What did surprise us is the increased recovery time and medical costs associated with anti-depressant medications.”

Even when controlling for age, chronic pain, medical complexity, and claim development (years), antidepressant claims, to a greater degree, were more likely to remain open at the end of the three-year study period. The effect on total paid costs associated with antidepressant prescription was greater in magnitude compared to all other drug classes. This finding is similar to that of a study by Dr. Xuguang (Grant) Tao of Johns Hopkins and others, who observed that antidepressant prescriptions were three times as likely to result in a claim in excess of $100,000. 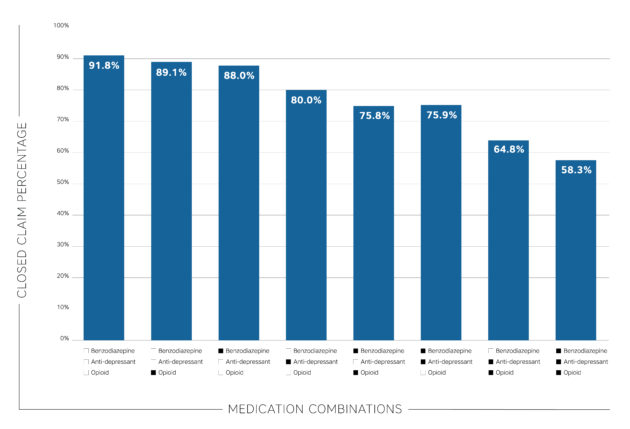 Researchers from AF Group and the Johns Hopkins University School of Medicine analyzed 22,383 work-related indemnity claims from 2008-2013 in the State of Michigan from AF Group brands.  “This information will provide support to physicians who treat workers’ compensation cases to explain to patients and employers that concurrent pain, depression, and/or anxiety requires more resources, which increases the duration and cost of the claim,” commented Artuso.